Like other districts of the capital, the “rue du Conservatoire” had been located on land made of marshes for a long time. Innkeepers and wine merchants settled gradually, as there were vineyards nearby. An attorney, in the middle of the 17th century, ordered the building of the first residence of prestige (a construction halfway between a lodge and a farm). At this same period of time, a slow start of urbanization occurs.

The Peyris Opera hotel is currently located ona part of the lands which sheltered the head office of administration of the Menus-Plaisirs (plan, Annex I). The Menus-Plaisirs were an important part of King Louis XIV’s administration (1638-1715), as it was in charge of the preparation of ceremonies, festivals and performances of the court. In 1795, the Conservatory of Music (at the time : Royal School of Singing and declamation, founded in 1784) was installed there ; declamation being only a part of musical training at the time. In 1806, a decree established a true academic teaching of drama. After the revolution of 1830, the Menus-Plaisirs disappeared for good.

Between 1830 and 1848, Louis Napoleon Bonaparte (Napoleon III) orders the Baron Haussmann to &quot;clean up&quot; Paris. Laws imposing strict construction standards start to appear. Facades of buildings had to be strictly made of beige ashlar, marked by streaks on the ground level and second floor. Moldings, pediments and cornices are also often present; 5 to 6 floors high, with room maids above, slate rooftops, attics and main gateaways. At that time, balconies were built on the 3rd floor (&quot;noble floor”, before the creation of elevators in 1870) and were usually of an important length (going continuously from one end of the building to the other). The rooms were often on the front row, facing the streets. Concerning the occupation of floors, the 1st floor usually consisted of shops; the mezzanine floors were usually occupied by retailers and the height of the ceiling were reduced. This can be explained by the need to let carriages enter through the doorways, which opened at the level of the first two floors.

The Peyris Opera hotel is located in a building which was built in the late 19th century. The building is therefore in the Haussmann style. At the time, there was no 5th floor; it was built later to accommodate the hotel staff. The doorway led to an open courtyard (now lounge). In 1902, Mr. Peyris opened the &quot;Maison de Famille Peyris&quot;. Each floor has its own bathroom; the wooden floors are made of Hungarian stitch (that is to say, the Haussmann mode). The 1st floor is occupied by a hairdresser, a butcher, a pork butcher, and a “stoppeuse” (a dressmaker specialized in the recovery of microscopic holes on all kinds of fabrics). In 1912, the entire building is converted into a hotel board. The shops start to disappear and are replaced by a large dining room, receiving the hotel guests. During the First World War (1914/1918) the occupying troops arrive in the premises. The hotel is then refurbished. In 1955, the courtyard is covered by a ceiling made of glass blocks. In 1963 the lift is installed. As she started to get older, Mrs. Peyris (formerly Hustaix), who took over as head of the institution after her father, decided to sell the property.

In 1973, the parents of the current owner acquired the hotel PEYRIS. The dining room (at the corner of rue Richer and rue du Conservatoire) is turned into a restaurant, independent from the hotel; it is open to the outside clients, under the name of &quot;The Balancette&quot;; the other part being used to serve breakfasts. In the 1980s, all the room - which already had a private bathroom for several decades at this point - gets to include a television set as well. In 1994, the management is now in the hands of a young and dynamic generation. Following renovations, the hotel Peyris is ranked at 3 stars. The installation of air conditioning is performed at the dawn of the twenty-first century.

In 2004, the hotel provides the setting for filming of &quot;The walker Champs de Mars&quot; with in the lead role: Michel Bouquet, rewarded actor for this film in 2005 by the “Cesar” for best actor. The proximity of the National Conservatory of Dramatic Art (hence the name of the street where the hotel is located) drains regularly to the restaurant &quot;Le Jardinier&quot;, located within the walls of the hotel, teachers (active actors) repeatedly rewarded by the “Cesar” and internationally renowned. The restaurant closed in 2014.

In 2014, works cease and that gives the institution a spirit of boutique hotel of charm. The guests are accommodated in rooms with gay and dynamic colors, in which the furniture and the atmosphere were thought by the CEO. The reception, bar, lounge and breakfast room keep the style Napoleon III ... revisited. Abstract paintings, with a unique personality for each room are painted by the current operators, completing customization whereabouts of each client and recalling our numerous visitors that the hotel is located in a part of an artistic nature.

Remember, a few steps away, the National Conservatory of Dramatic Arts (at 2 rue du Conservatoire), which formed during the last fifty years many prominent actors of French theater and cinema; and the existence of many theaters (Théâtre des Nouveautés, Théâtre st Georges, s. o. ...) . The hotel is also close to the auction house Drouot Richelieu for art objects. The Opera Garnier regularly presents classical ballets internationally recognized for their quality. The Olympia, the concert halls of Rex and Folies Bergère let pride to current singers.

The architecture of the buildings surrounding the hotel Peyris Opera bring back more than a century ago the pedestrian walking there and let himself get lost in the maze of streets that hide sometimes surprising places ... (Annex II).Let us not forget, either, the St. Eugene Church-St Cecilia named two bosses St. Eugene in honor of Eugenie, wife of Napoleon III who modernized the area and St. Cecilia, the patron saint of musicians. This is the first church in Paris tobe made all of metal. The unusual layout of this place is due to Eugène Viollet-le-Duc, famous 19th century architect. And to end on an anecdotal note: the famous writer Jules Verne married in this place in 1857.

So good walk and enjoy your stay in the heart of Paris! 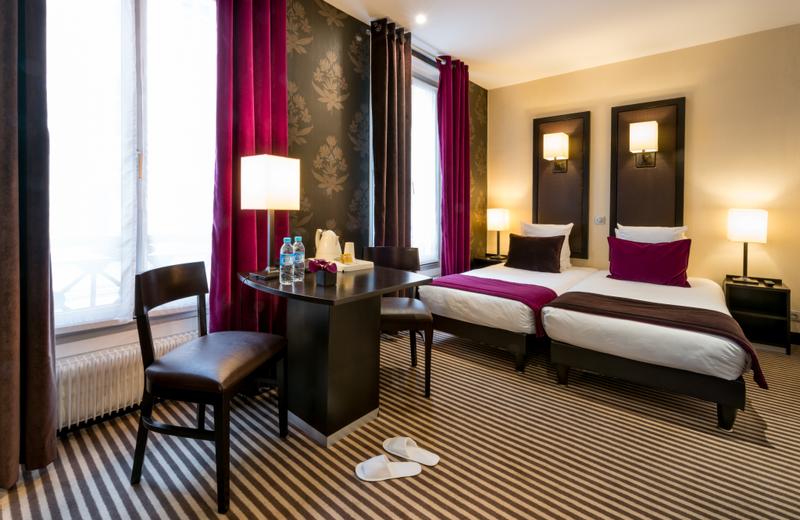